The crisp, fall temperatures signify the height of football season in America. Braving the cold weather to tailgate before the game. Proudly wearing the jersey of your favorite team. Cheering from the stands. While the NFL epitomizes the game, the love of football stems from backyard, neighborhood games and the Friday night lights on high school fields across the country. To many, the football season is the picture of small-town, American community; yet underneath the camaraderie and fanfare a great danger lurks within this favorite pastime. 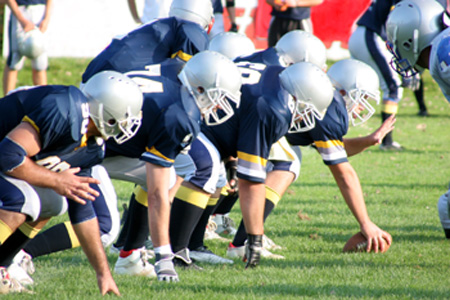 Recent reports and media focus are beginning to open our eyes to the great risk of concussion and brain injury in football players. Earlier this month, a PBS documentary, "League of Denial", received critical attention as it accused the NFL of a decades-long cover-up in which the league allegedly concealed the dangers of concussions and even forced players to return to the field prematurely for profit. In August, the NFL reached a $765 million settlement in a law suit brought by retired players regarding the devastating effects of brain injuries incurred as players.

Unfortunately, the prevalence of brain injury in football becomes even more alarming when you look closer to home. According to a recent study reported in the Journal of Neurotrauma, an estimated 43,000 to 67,000 high school football players suffer a concussion each high school football season.

Concussions should not be ignored or down-played. These brain injuries generally require weeks or months of rest and restricted activities until the danger of re-injury has seemingly passed. Players who have suffered concussions are widely believed to be more susceptible to further brain injury throughout their lives. In fact, research has indicated that repeated blows to the head can lead to neuro-cognitive changes and brain degeneration which manifests in symptoms such as psychiatric disorders and long-term memory loss. Cumulative damage can cause chronic traumatic encephalopathy (CTE), “parkinsonism, speech and memory problems, slowed mental processing, tremors and inappropriate behavior.”1

What should we do in response to this frightening information? Should parents keep their children from playing football or other contact sports known to increase risk of head injuries? Should we skip next week's game in protest?

I believe that education is the best path to preventing concussions in players of all ages. Coaches, players and parents must be educated about the steps to take to minimize the likelihood of this dangerous trauma and how to appropriately respond when an injury occurs.

In response to the "League of Denial" documentary, New Orleans Saints quarterback, Drew Brees highlighted the importance of education in the prevention of injury.

"There's concussion education that I think is taking place now more than ever so that people can know the risks and know how to detect it (brain injury) and know the back-to-play protocol that needs to happen before you put a kid back out there to play...As a parent, you want to understand what those risks are, and then know the protocol that needs to take place when something does happen."

Brees said he will allow his own children to play football when they are the appropriate age.

Thankfully, some positive progress is already being made. Design developments of helmets and pads are helping to prevent athletes from concussions. Additionally, many high school, college and pro teams limit the amount of practice time the players are exposed to full contact in an effort to prevent non-game-time injuries. Identifying signs of a brain injury and dealing with it promptly by seeking proper medical care is paramount to ensuring damage is managed and limited. Click here for more information about the signs of brain injury from the Centers for Disease Control and Prevention.

As evidenced by the recent NFL lawsuits, sports programs may have liability for failing to take precautions to safeguard players from potential brain injury. Unfortunately, lawsuits cannot prevent harm that has already occurred, but may serve to shine light on areas for improvement.

Dré Fleury is the Personal Injury Practice Group Leader at Crumley Roberts. He and his wife Grace have three children and live in Charlotte, N.C. In his spare time, Dré enjoys playing soccer, cycling, spearfishing, free diving and working on home improvement projects.